Baby skin is usually delicate and therefore susceptible to many types of rashes. It is common for babies to have an outbreak of rashes especially if they are just a few months old. It can occur in various parts of the body including the back, arms, thighs, stomach, faces, and other parts.

Don’t be alarmed when you see rashes forming on your baby’s body, they are typically treatable. In rare instances they will constitute an emergency, as much as they are uncomfortable.

Signs of rashes in babies

Well, the most common sign of rashes in babies is rashes itself; you will be able to see it on your baby. Besides showing the obvious signs of small lumps on the skin, your baby may show other symptoms that are unique to a specific type of rashes, including:

In some cases, rashes in you can be a premonition for a more serious condition or illness. There are different types of baby rashes, and before you learn how to treat it, perhaps it is a good idea to understand what you are treating in the first place. This way, you will know the kind of treatment you should use and if you must see a doctor.

Hives are extremely itchy rash caused by allergies. It consists of crusty large welts on the skin, mostly circular with an insipid center. Hives are mainly caused by allergic reactions especially to food, medicine, viral infections, or insect bites and stings. The rash spreads rapidly across the body and can last up to four days before it disappears by its own. The local form of hives typically indicates skin’s direct contact with an intolerable substance such as pollen, plants or foods.

This is arguably the most common type of baby rash. It is an inflammation of the skin around the nappy area and is usually red, sore, and inflamed. This type of rash can be caused by different factors including poo or urine irritating the skin of the baby in the nappy area. Nappy rash can be avoided by keeping the nappy area of your baby clean and dry all the time as well as frequent nappy changes.

You should also consider leaving your baby nappy free for some period during the day. Also, you should provide protection for the nappy area skin by placing a barrier cream at each nappy change; such as zinc or soft white paraffin. Be sure to also check the material used to make the nappy as some are not tolerable when they come in contact with the skin of the baby.

If this rash becomes persistent, you can treat it with a prescribed cream, though you should avoid using antiseptic or talcum powder as a method of treatment. If the rash was as a result of fungal infection, use an antifungal ointment from the pharmacy.

Erythema multiforme is typically triggered by medication, infection, or illness. The rash is usually in the form of red spots that develop predominantly on the feet or hands before moving all over the body after a day or so. This type of skin rash is not usually itchy but can be uncomfortable with blisters or raised.

Erythema multiforme is often preceded by a short illness or fever, though it is not contagious skin condition and usually disappears without treatment after 3 or 6 weeks.

Baby acne can appear in the cheeks or nose of the baby especially during their first few months after birth. They are common and should not be a cause for alarm, and in many cases, it usually resolves on its own without any treatment after a few months, but it can also go for up to a year.

It is still unclear what causes baby acne, but some researcher thinks it can be caused by an infant or maternal hormones. They appear as red pimples or bumps, and in some cases, whiteheads or pustules may develop also as well as reddish skin surrounding the bumps.

Acne may become prevalent if your infant is crying or fussy. Fabrics can aggravate the acne or saliva or vomit that stays on the baby’s face.

There is not much you can do as far as treatment of bay acne is concerned except being patient. But in some instances, you can get rid of the acne by cleaning the affected area with warm water for about three times a day. Don’t sue lotion or soap though on the irritated skin. Also, avoid using acne products meant for adult, and scrubbing or squeezing the affected area.

Some mothers suggest dabbing the affected area with breastmilk for a quick healing process.

This is a generally harmless skin condition where the skin appears bumpy and rough as if it is permanently enveloped by goose pimples. This type of baby rash occurs mainly on the upper thighs and arms of a child. In some instances, the condition is passed down from the parents or family members and is prevalent in babies with hay fever, asthma, or any other skin problems.

It is typically caused by the accumulation of keratin, which then forms a crusty plug that blocks the skin pores. It is not known exactly why keratin builds up but it has been associated with some types of skin condition like atopic dermatitis or genetic diseases.

The bumps may come and go away as the child gets older. It is not brought about by an infection, nor is it contagious. It also won’t harm your baby and it doesn’t itch as well. But if you feel it attracts attention from people, you can use lotions or cleansers to make it look better.

Other remote symptoms of this condition may include dry, rough skin in the affected area, and drier skin.

Treatment for keratosis pilaris is not necessary, but as a parent, it is understandable if you get worried and in this case, you can consult with your family doctor or a dermatologist.

Milia is common white spots that develop in the face of newborn babies. They are nothing serious except just blocked skin pores. They don’t itch and are not contagious. Milia will clear up on their own without any treatment within two or five weeks.

Eczema is an itchy skin rash that makes the skin to appear red, dry and cracked in the creases at the elbows and knees. You can use corticosteroid creams to treat this condition to reduce inflammation, alongside moistures to prevent the skin from drying out.

Eczema can show up when the baby is just a few months old and the symptoms can be triggered by substances such as particular foods, and soap. It is a long-term skin condition and it can disappear on its own when the baby reaches adulthood.

Unlike many skin rashes in this post, ringworm is highly contagious and causes a ring-like red rash to appear on the skin with a clear center. It doesn’t have a specific location and can occur anywhere in the body, though it is quite common in areas like feet, scalp, or groin.

Ringworm worm is usually caused by a fungus, contrary to a common misconception that it is caused by a worm. It can be treated by antifungal creams from a pharmacy. If your child is affected by ringworm, you should keep him or her at home for at least 48 hours after the first treatment to avoid spreading to other children. Keep in mind that ringworm is a contagious skin rash.

This is also a common form of skin rash that can appear on your baby’s skin. As the name suggests, it is caused by heat. It is usually tiny red blisters or bumps on the skin which is typically itchy.

Since it appears after your child is exposed to a hot or humid environment, you can reverse the effect by cooling the baby down. Heat rash would disappear on its own after just 3 days without any treatment.

Pityriasis rosea is a minor skin rash that usually appears right after a sore throat, fever, or cold. It mostly affects children over the age of ten.

It starts with a single tan patch on the back or chest of the baby. Afterward, oval red patches will appear on the back, limbs or chest over couples of weeks. The rash might be itchy and result in your child to feel tired and ill.

It is not known what causes pityriasis rosea, but according to researchers, it might not be contagious. The rash doesn’t need any treatment and it will clear up on its own after a few months.

Get updates on Baby Care and Parenting Tips

You have Successfully Subscribed!

Prams or Strollers – What to buy for your baby?

Tips for How to Travel with a Baby 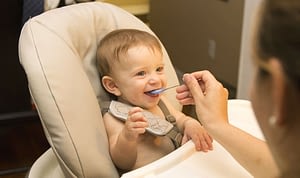 Infant car seats can significantly reduce the chances of a possibly fatal injury for young ones as well as for toddlers. Despite being a common device, many parents tend to use the baby car safety incorrectly

Why having a baby rocker is the best choice for parents

Baby swing, baby rocker, and baby jumper seats mirror the shaking movement of a baby lying on the supporting arms or stomach of the mother.

How to Soothe a Crying Baby in Easy and Effective Way

A crying baby can be unsettling not only to the parent but also to other people around. Crying is considered the best means of communication for babies, and when he or she cries without stopping, chances are he or she is in pain.